Why Choose Filmage Screen Rather Than Screencast-O-Matic While Recording Mac Screen?

Screen recording software may not be the most frequently used application type, but once you need to use screen recording software to record online lessons, record game videos, or record video tutorials, you will often find out that the recommended apps in Google are really problematic: The recording time is limited in 5 or 10 minutes, the recording quality is blurry, and some apps even cannot record the screen successfully.

As a person who often needs to record various video tutorials, I have tried a lot of screen recording software, so I choose Filmage Screen and Screencast-O-Matic which are two good software in my opinion. So, which screen recorder software for Mac is better?

Let me start with the conclusion: Filmage Screen is my favorite and most recommended screen recorder software for Mac.

First, let me show you a clear table to view the differences between Filmage Screen and Screencast-O-Matic. 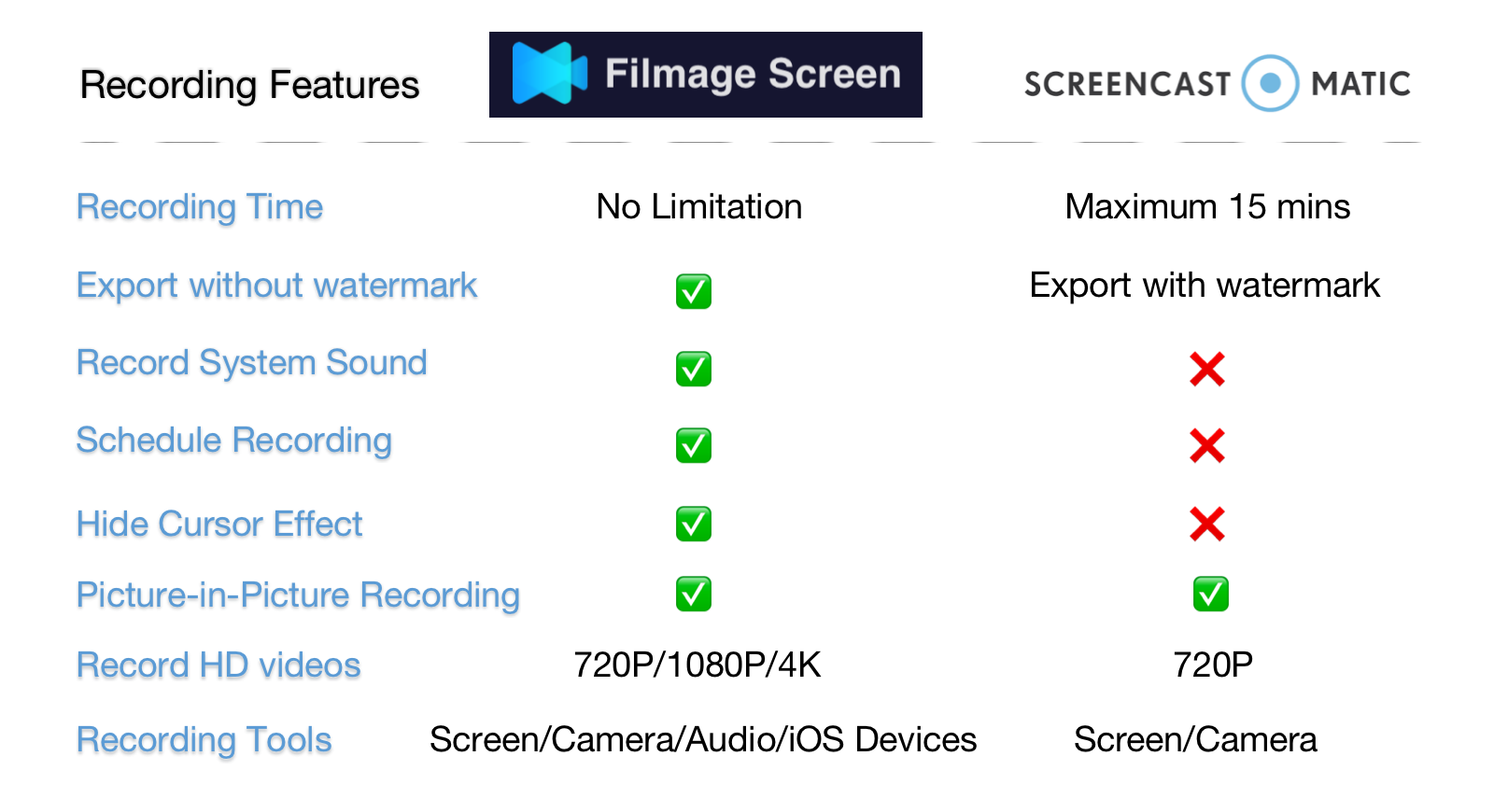 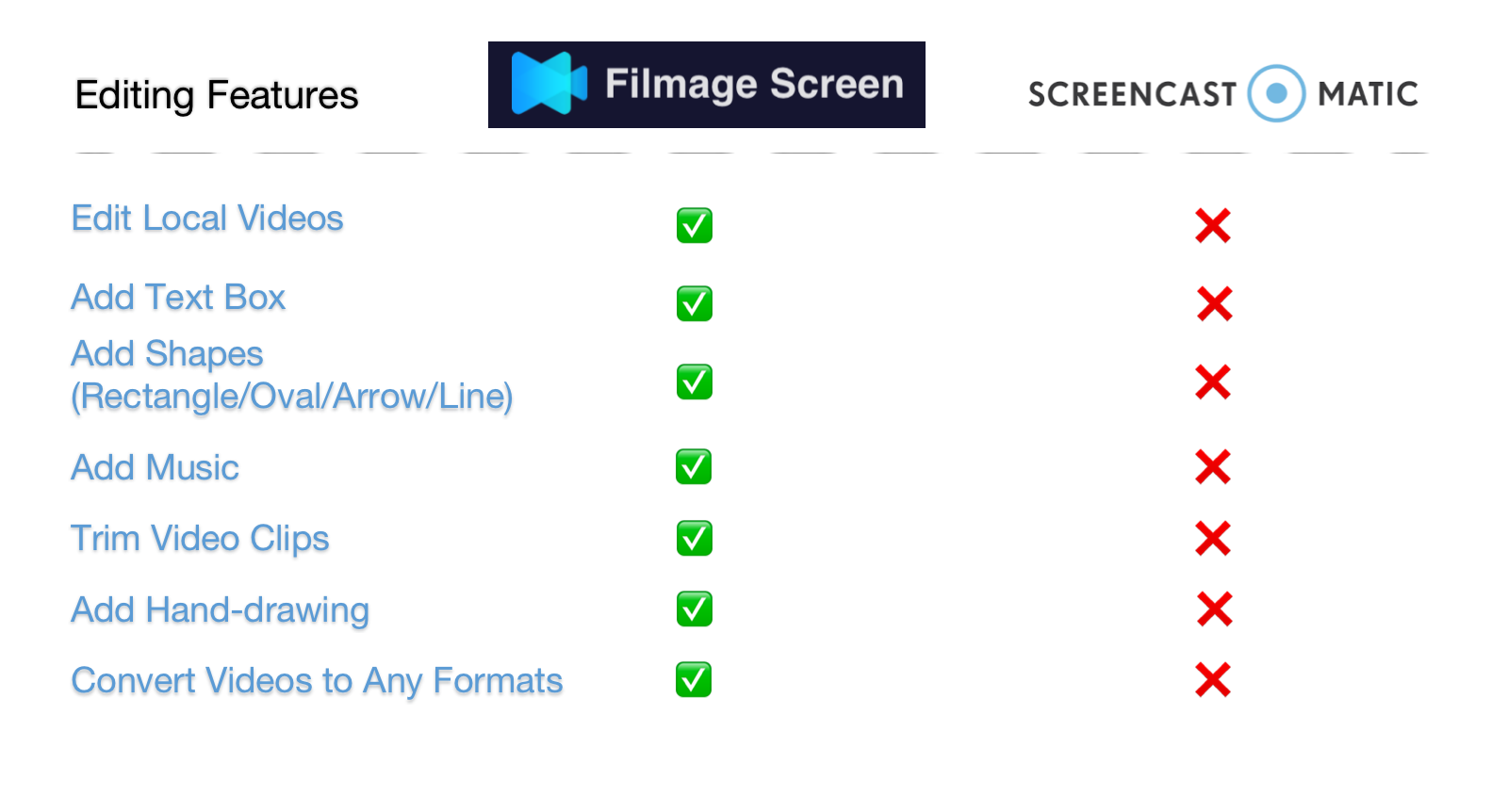 Next, I will compare the two software from the three aspects in detail: screen recording, video editing and other features. You can make your own choice. 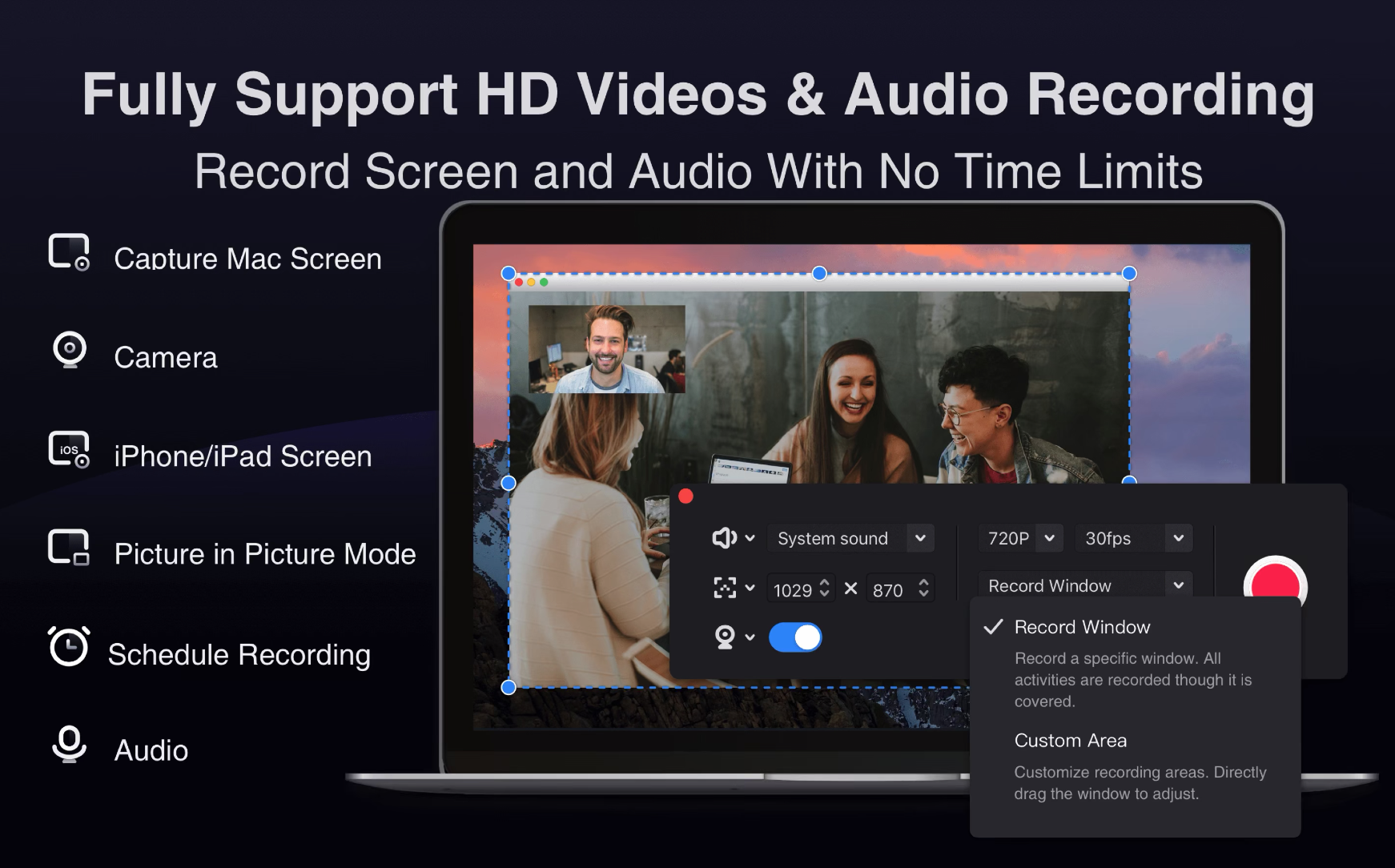 Select the Audio Sources. You can choose to record system sound, microphone, or both at the same time. This is an indispensable feature for the students and workers who use Zoom, Microsoft Teams or other app like that to record exams and meetings.

After selecting a window to record, all activities in the window are recorded though it is covered: you are recording the online lesson and open another excel, then this excel will not be recorded.

Turn on the picture-in-picture recording mode to record the computer screen and camera at the same time. It can be helpful while recording a lesson or a video tutorial.

Filmage Screen has unlimited recording time so you can record as long as you want!

After finishing recording, there is no watermark attached on your video.

7. Show Cursor Effect or Not:

Click settings, you can set whether to display the mouse cursor effect. Make your video more attractive.

Start Screencast-O-Matic and click Launch Recorder. After the screen recording permission is authorized, you can see the recording interface: 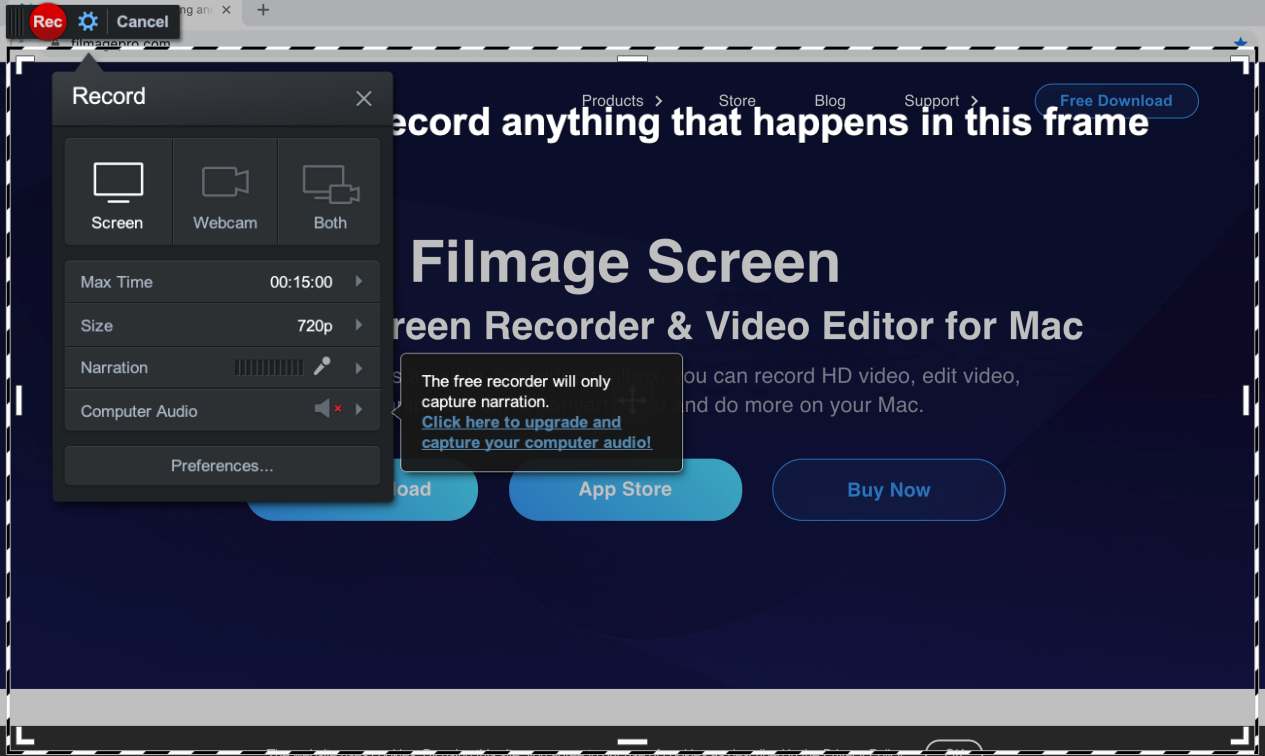 1. It can only record 720P video. The recorded videos are really blurry.

3. The maximum recording time is 15 minutes, it can be really inconvenient while recording online lessons or online meetings.

4. The exported video has a watermark attached.

5. Picture-in-picture mode: the camera and screen can be recorded at the same time.

Although its operation interface is clear, but the function is weak, and the free version is limited in recording time and cannot record system sound, which will bring a lot of trouble while recording.

The most attractive thing about Filmage Screen is that after the recording is finished, you can directly edit the video, and you can also edit the local file. 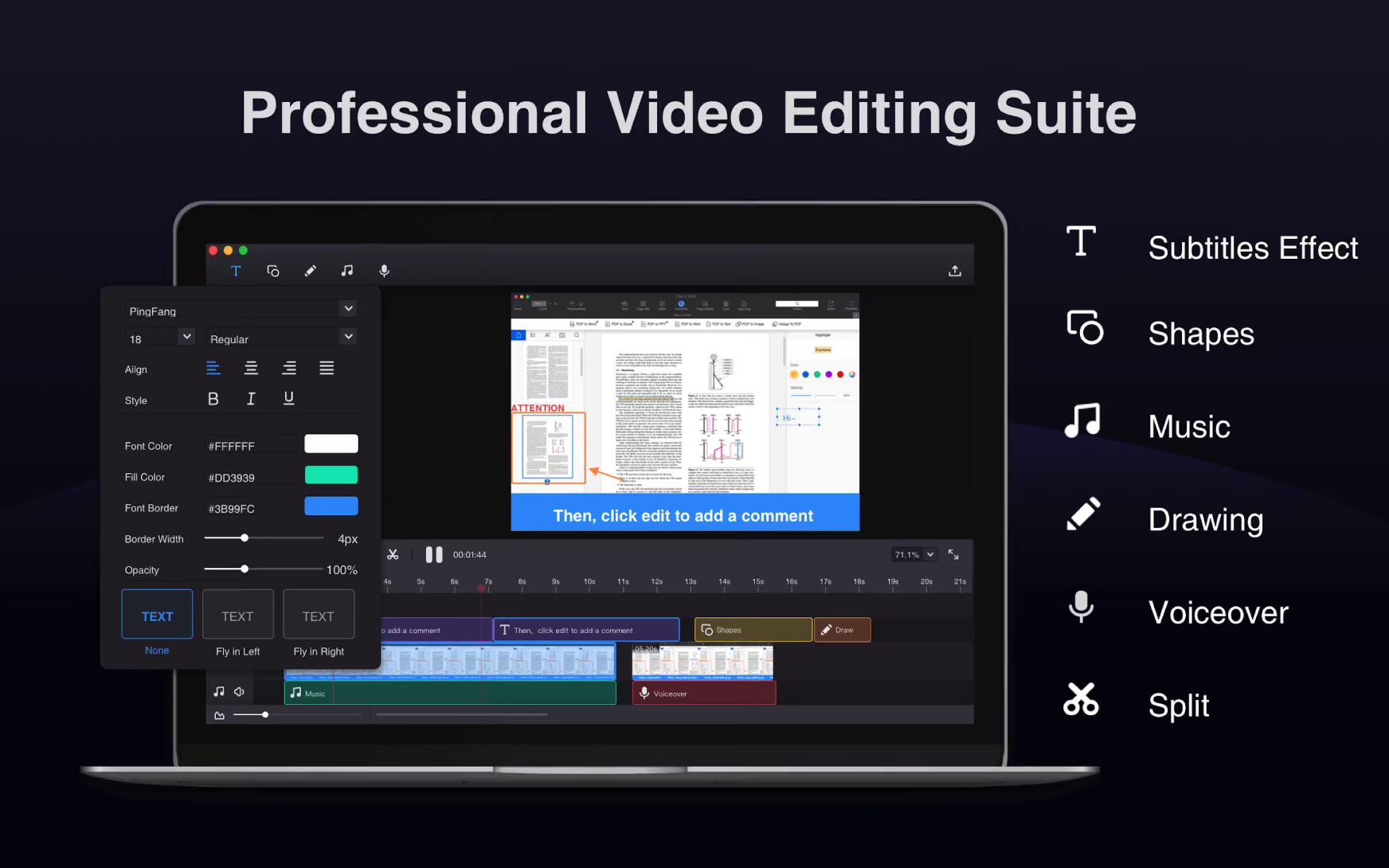 If you do not upgrade to purchase the paid version of Screencast-O-Matic, all editing functions are not available. Can't edit local files, can't add text box/shape/music, can't cut video... These necessary features for making video tutorials, Screencast-O-Matic free version can not realize them. 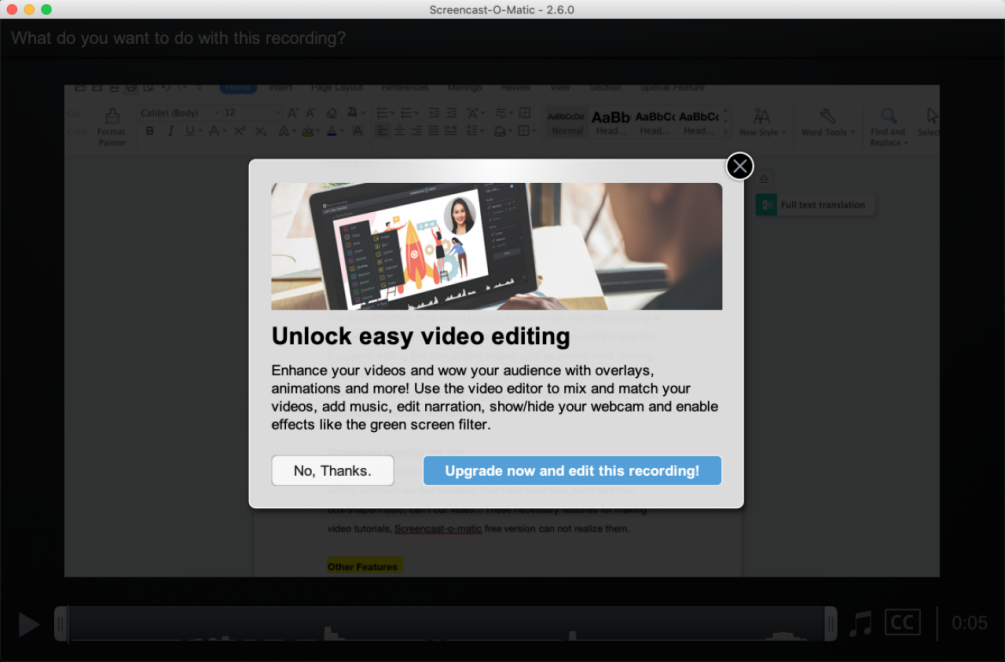 In general, Filmage Screen does not limit the recording time, export videos without watermark, record system sound and microphone, edit the video after the recording is finished. The advanced version supports schedule recording, picture-in-picture recording, adding videos/pictures and converting all formats. Its powerful features are totally worth its price.

Choose Filmage Screen, an useful and all-in-one screen recording software, which can meet all your recording needs.

How to Create Your Own Video Tutorial on Mac? 50% OFF, Best Back to School Sale in 2020